A cold that had been quietly knocking at the door fully arrived on a recent weekend, making Saturday and Sunday an enforced two-day birthday retreat. Lucky for me my good friend Tim came over with roses and a book I’d been wanting – and a profound gift it has been.

Tamar Adler’s “An Everlasting Meal, Cooking With Economy and Grace” is the most inspiring cookbook I have read in this century. M.F.K. Fisher is her inspiration, and now, Adler is mine and, I hope, will be yours as well. Her writing is poetic and honest. Her message to home cooks is essential if we are to revive the pleasures of and methods for eating well at home:

“There is a prevailing theory that we need to know much more than we do in order to feed ourselves well. It isn’t true. Most of us already have water, a pot to put it in, and a way to light a fire. This gives us boiling water, in which we can do more good cooking than we know.”

Her recipes are more blueprints for basic techniques for groups of foods and their simple, easy-to-remember embellishments. Adler writes,

“Cooking is best approached from wherever you find yourself when you are hungry…there should be serving, and also eating, and storing away what’s left; there should be looking at meals’ remainders with interest and imagining all the good things they will become.”

After reading this book, you have an easily digested game plan for delicious meals at all times.

Adler’s advice is so simple to understand that, after hours on the couch reading, sniffling and nodding off while sitting up, I rallied to the kitchen and pulled out all the aging foods in my fridge,  on their way to their own sick bed, and took to roasting them — beets, sweet potatoes, a whole Red Kuri squash going soft in one spot, a head of cauliflower and a bunch of broccoli —using every inch of the oven, as Adler urges, for economy of heat use. I even washed and prepped the few leaves of kale and chard stems still edible. A couple of hours later, everything was stored and back in the fridge, ready to participate in a multitude of delicious meals. Like a good soldier, I had done an admirable day’s work for my fridge and myself.

Sunday morning, feeling a little better, there I was sautéing the prepped kale and chard stems with soft-scrambled eggs, ala Adler’s suggestions: “ ‘Frying’ and ‘scrambling’ imply too much aggression. I soft-fry and I soft-scramble . . . scrambling should just be a series of persistent nudges.”

And on to a vegetable soup: the parsnips, red onions, celery, zucchini, and Napa cabbage soldiered on in olive oil, followed by the roasted turkey broth I had defrosted. My next-to-last Parmesan cheese rind went in to flavor the pot, along with a few dried summer tomatoes in olive oil, softly bubbling away for a few hours. I continued to feast on Adler’s good words. The soup would await the next day’s meals, though, as it improves with time spent in its new transformation.

Sunday lunch was leftovers: warmed up fish, roasted winter squash and cauliflower with some olives. In my cupboard, they were a can of olives in water, and at her suggestion, I placed them in some red wine vinegar, transforming them into a piquant addition to several dishes. Adler admires olives: “I challenge anyone to find me a situation a good olive can’t fix…they’re versatile, can be a dish’s anchor or its sail, and it takes only a precious few to do either.”

My next meal was a fresh piece of cod marinated in grapefruit balsamic vinegar with the juice of half a grapefruit, and then cooked in the pan, topped with sautéed red onions, olives and capers. Try warming some green olives – they are delicious!

With chapters titled, “How to Teach an Egg to Fly,” “How to Stride Ahead,” ”How to Catch Your Tail,” and “How to Snatch Victory from the Jaws of Defeat,” Adler covers all the aspects of cooking well and simply with economy and taste. She offers historical and cultural contexts for techniques and dishes, and though she’s a youngster by my standard, her wise words ring true.

Tamar Adler’s book revived my heart and my fridge full of neglected produce, inspiring me to roast and simmer and nudge my food into delicious and delightful meals that honor the earth’s gifts to us, utilizing everything (did I mention the vegetable stock made with all the ends of things that flavored the soup?) I had on hand. I hope you relish it, too. 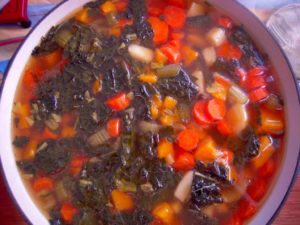 Chicken Soup from “An Everlasting Meal”

This is a template for making any kind of soup. Enjoy!

Roasted chicken is wonderful and produces great drippings, but chicken cooked in a pot of water leaves you with several dinners, lunches, and extra broth, and is an appropriate and honest way to do a lot with a little.

Buy a whole chicken at a farmers’ market if you can. They are much more expensive – up to three times as expensive – as chickens raised in factories, which most, even the ones labeled “free range,” are. The two are completely different animals. As soon as you boil a chicken that was raised outdoors, pecking at grubs, you’ll notice that its stock is thick, golden, and flavorful. When it cools, it will thicken. If you’re getting more meals out of your chicken, and more nutrition out of those meals, spending the extra money makes sense.

Previous Post: « Thanksgiving Then and Now
Next Post: “An Everlasting Meal” Tips That Changed My Cooking Life » 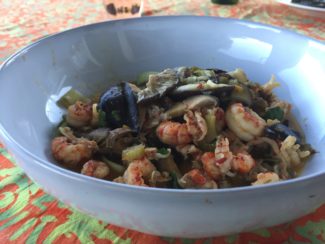